Press Coverage, "Making the most of white at the Oxford Arts Alliance" January 13, 2012

I have been asked to transpose a recent article in the Chester County Press into a larger readible format online...from the original local newspaper..........Go to a previous blog for details on who the participating artists are in this event. 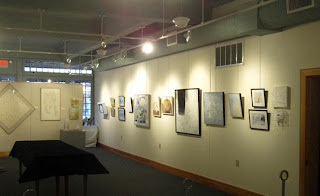 Making the most of white at the Oxford Arts Alliance
by John Chambless, Staff Writer
Chester County Press, Wed. January 11, 2012

Given the mild winter we've had so far, there's a lack of white outside, but inside the Oxford Arts Alliance, "The White Show" reflects an admirable broad range of media and styles.

Acrylics on paper by Tom Hlas are showcased at the door.  The abstracts explore circular shapes applied in white, with dark shapes and circles adding contrast and depth.

Among several works by Janeice Silberman,  "Land Square" is a perfect application of white acrylic and shadowy gray underlay that suggests distant mountains in an arctic landscape.  It's completely successful painting that makes its points with subtlety and grace.  And don't miss Silberman's small "Study in Black and White," elsewhere in the gallery.  It suggests a shadow cast on a snow bank.

Favi Dubo has three abstract works that have a high-tech edge and undeniable impact.

Bill Shimek shows fours shadow boxes - for lack of a better term - that frame a jigsawed white wooden panel in a deep black background, giving the female subjects a startling dimension that pops off the gallery wall.  They look like '60's film stills come to life, and they're among the show's most striking works.

Lisa Baird has six intriquing puppet-like figures displayed on slender rods, blending elements of rabbits, human faces and a spirit of off-kilter whimsy.  They are fascinatingly odd, yet sweet.

Peter Willard's two watercolors are subtle but powerful.  "Squall" is a blue-gray swirl that suggests wind-whipped snow against a thicket of trees, and "Kim's Tree" is a wonderfully painted study of a bare trunk and branches against a wintry sky.  The surface is etched and dappled with paint, but it looks like an ordinary watercolor when you take a couple of steps back.  It's a magical little piece.

And you' want to linger over Dan Miller's three large contructions of intricately cut white and tan mat board that are layered and pieced together like three-dimensional jigsaw puzzles.

In a cold month, it's great to see the Arts Alliance making the most of the season's start hue.  Make sure to visit "The White Show" to see how much can be made out of whiteness.